In early January of 2016 I flew to Las Vegas via Chicago for CES 2016. Along the way I passed the time by taking some oblique aerial imagery. Let’s take a look at some of the more interesting features I saw along the way. 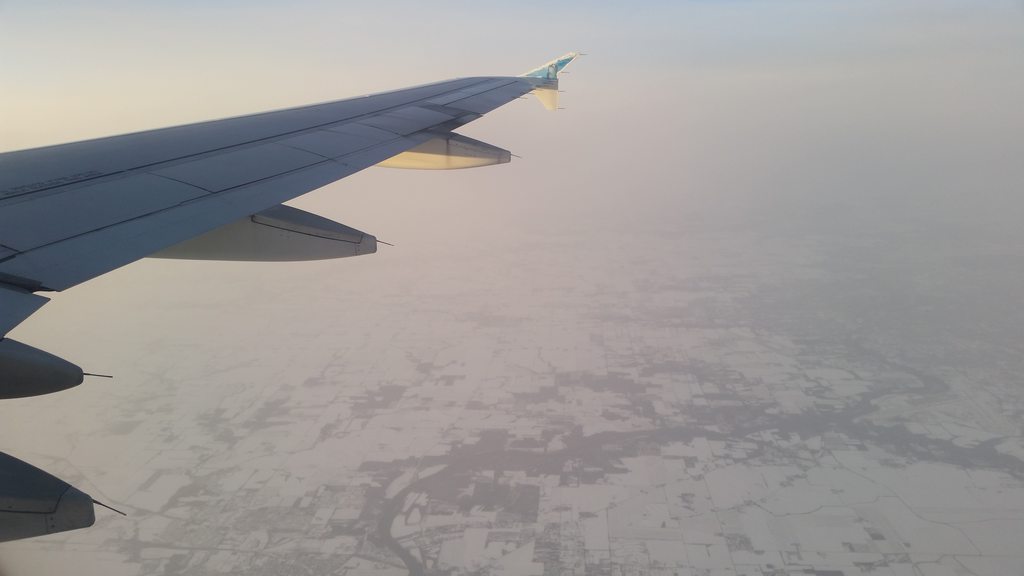 This first image was taken not long after take off from Chicago O’Hare airport. You can see there is snow on the ground. This will change as we move further south. 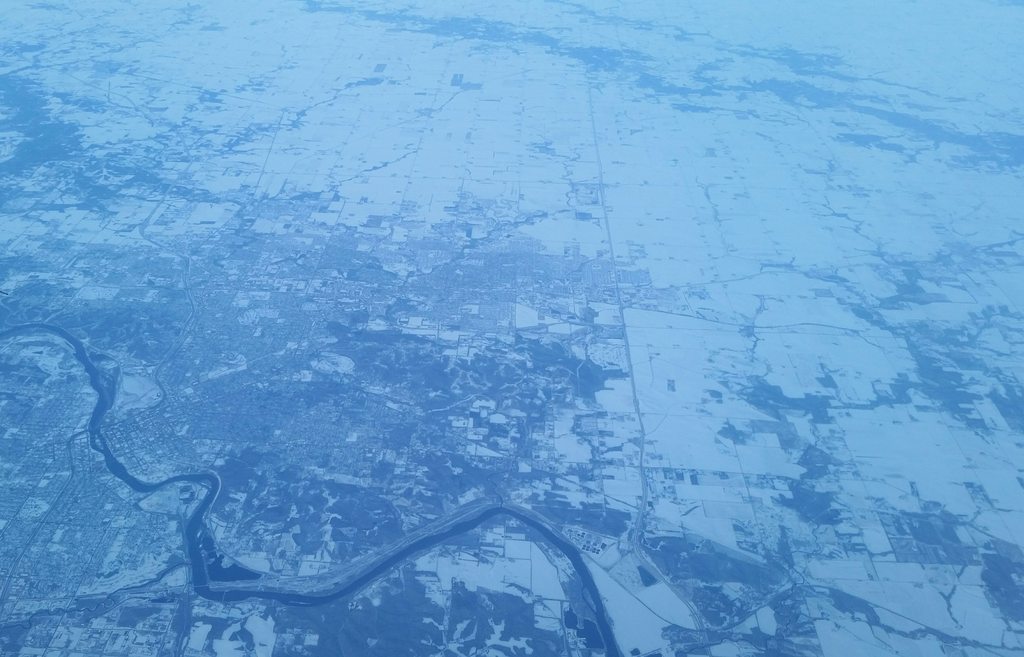 A river with a city surrounding and agriculture beyond that. I believe this is the Illinois River not the Mississippi. 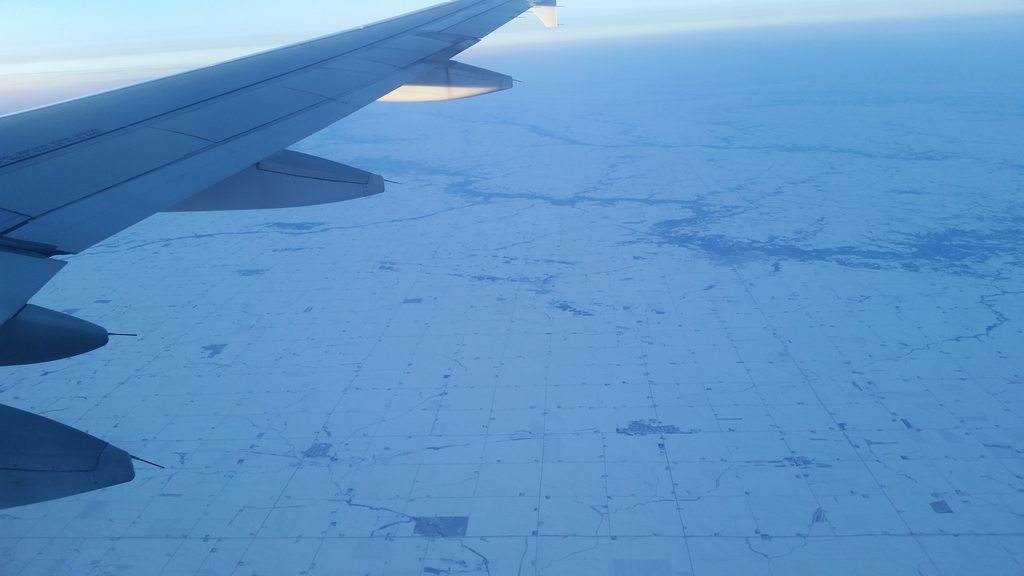 The Public Land Survey System (PLSS) is very apparent from this view. I’m willing to bet those squares are one mile township sections. Pretty bizarre to see them so uninterrupted. 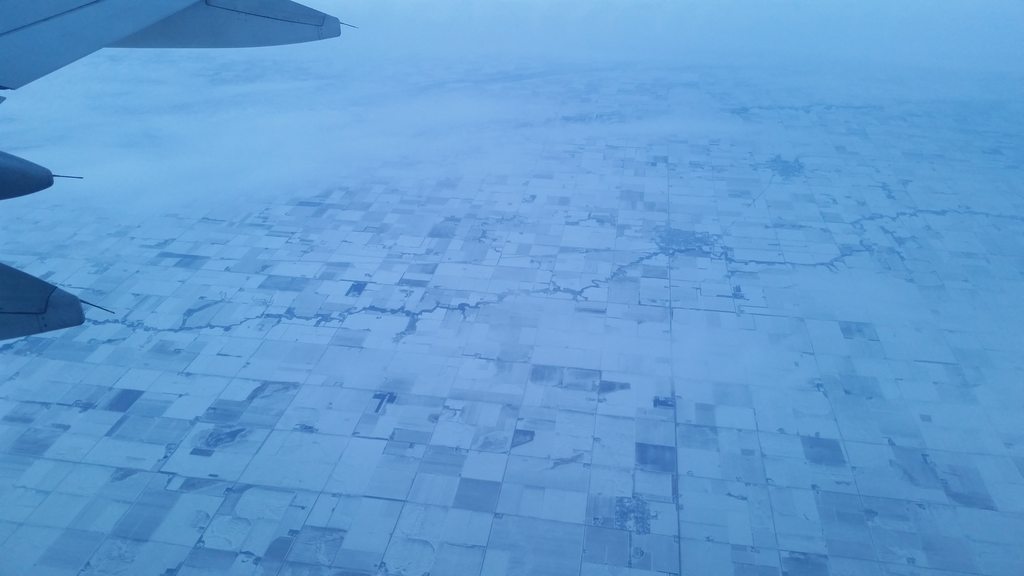 I bet these rectilinear features are familiar to just about everyone. The large abundance of agricultural fields in this suggests that it is fertile or otherwise well suited for cultivation. Perhaps the dark sinuous feature in the distance helps to provide hydration. The varying color and texture of the fields suggests possibly different crops, stages of rotation, or cultivation methods. It is also likely that within this extent the soil also varies enough to result in color and texture variation where the ground is bare. 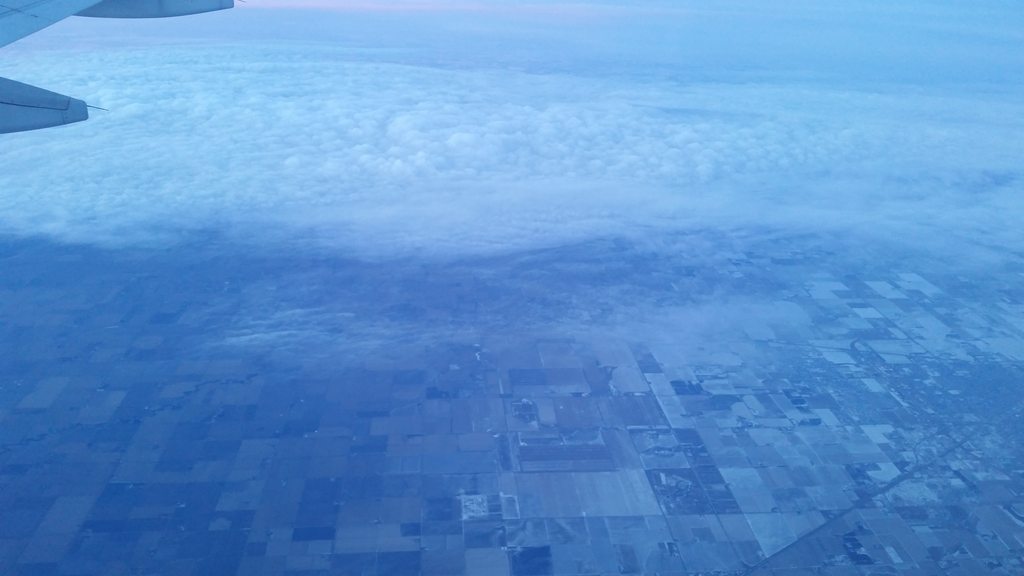 In this image we can see the left side is much darker in color than the right side. This is the transition from the snow covered northern regions to the warmer barren regions. Full disclosure, I saw more snow later in the flight as we passed over mountainous areas. 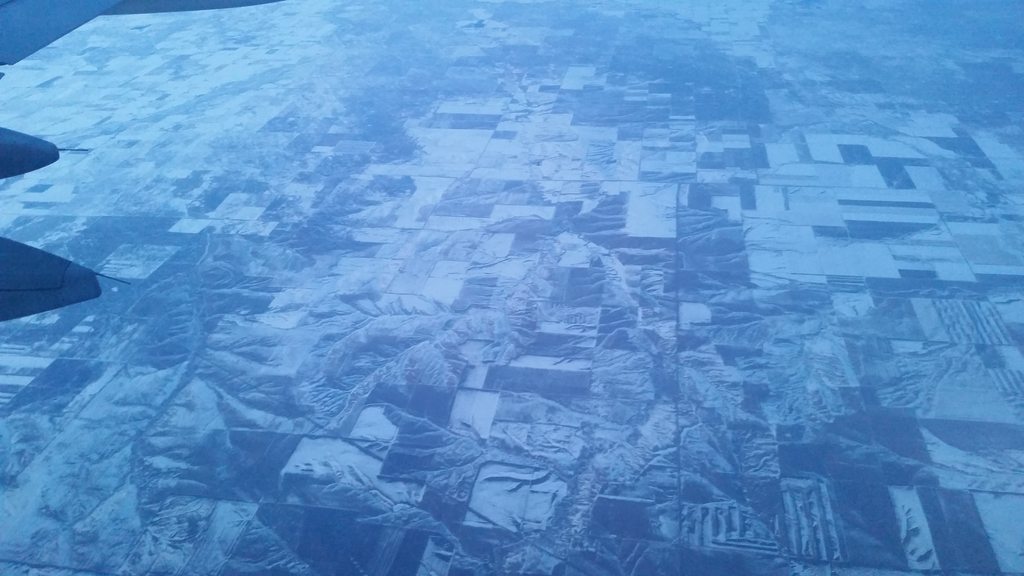 This image has a lot going on it, so let’s try to break it down. In the lower portion of the image we see sinus branching features with color alternating on either side of the feature. Given the shape, color, and pattern there are mostly areas with extreme topography. Though these areas run linear dark uniform width features. One is normal to all other rectilinear features so it is likely a major road while the other is orientated on an angle. It too could be a road, but given it’s placement where in more or less minimizes extreme topography, I wonder if it might be a railroad. In the lower right portion of the image we see more rectilinear features that appear to be agricultural fields. Although this time the color and pattern see unique. Large blocks of alternating colors indicate areas of snow and barren ground. I wonder what these features could be. 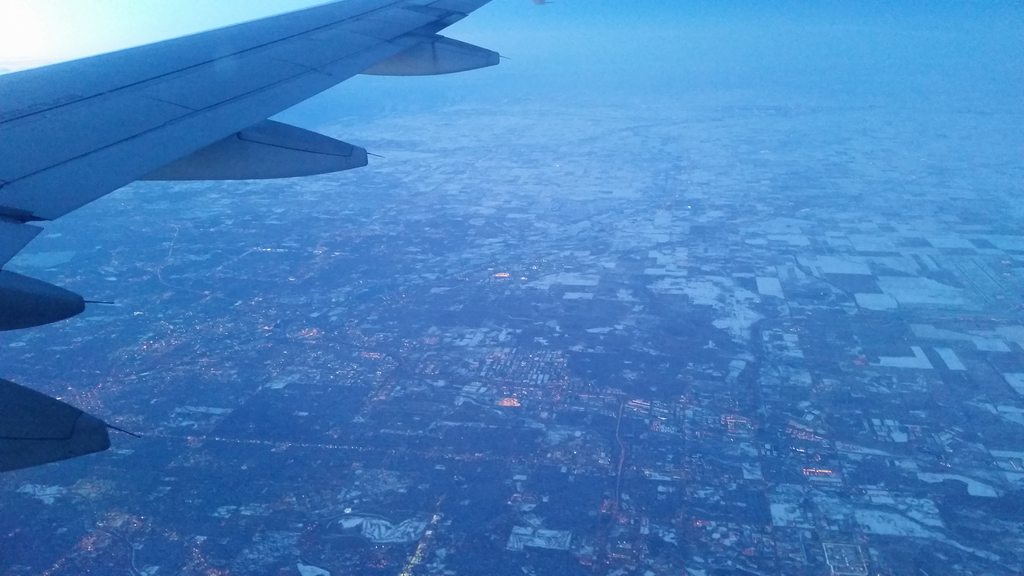 Since we are flying west, we were sort of chasing the sun for the entirely of the flight. This resulted in substantially extended sunset. Eventually we did see areas begin to light up. It was cool to see the stark contrast of warm reds, oranges, and yellows painted upon the bleak blue, black, and white landscape. 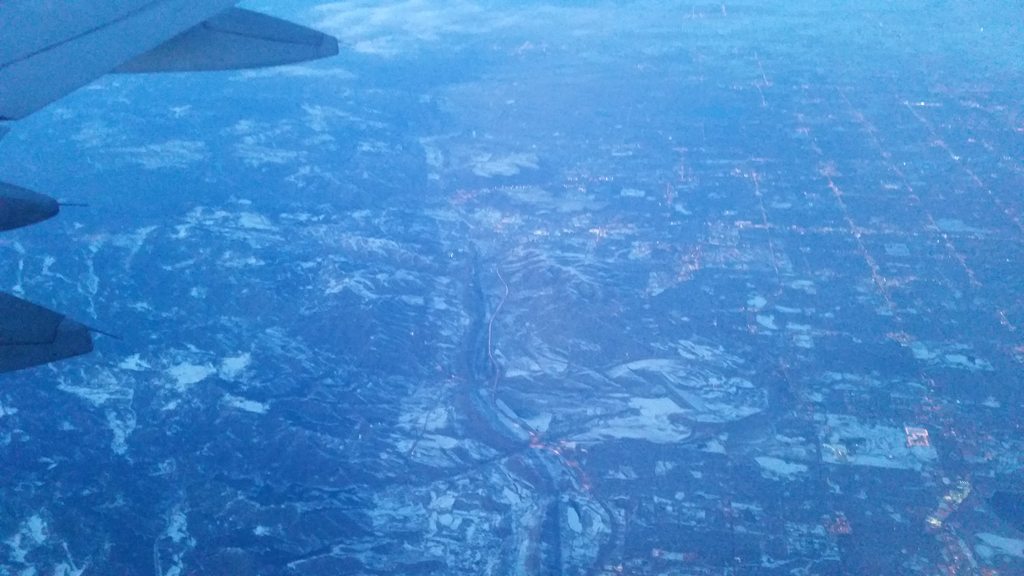 Here is a very strong break point in the landscape. The left side of the image is dark in color and hue and appears rough in texture. Much of the shape is organic in nature and portions white in color indicate snow. All of these characteristics seem to indicate a mountainous region. On the right side of the image we see the familiar rectilinear shapes. Coupled with the previously discussed warm hues against a dark backdrop we can easily identify this as a relatively populated area. The more densely populated areas of the image can be seen as clusters of the warm hues. Dividing the two sides of the image a dark sinuous structure that is organic in shape. The dark color suggests water while the surrounding light areas indicate snow covered flat areas. This appears to be a river surrounded by at least seasonally inundated areas given there is very little anthropogentric development nor an invasion of taller woody plants. 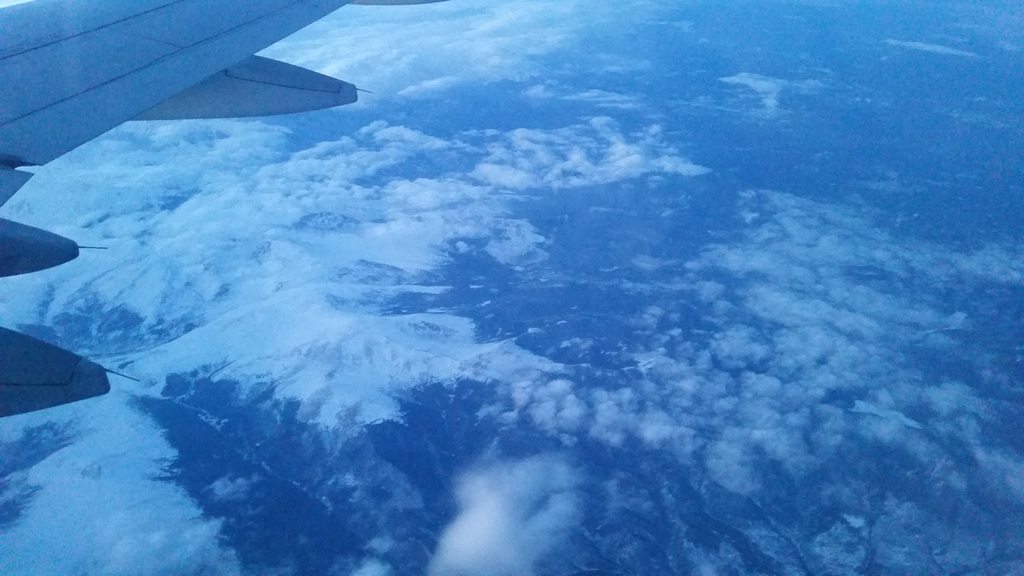 This last image shows a large area of light hue surrounded by dark landscape. The shape of the light area is organic in nature, seemingly random. Lines, although slightly sinuous, appear to radiate from the center of the light area. Given the hue and brightness of the light area it seem that this is a snow covered area. Snow this far south indicates high elevation. This in confirmed by the radial nature of the lines in the area. It was pretty cool to see mountains on my flight. To my dismay, no one else on the plane seemed impressed. I guess I am too easily amused.